“I thought we said that clump of grass was out?”

Thinking of Brian Glover and the bullying schoolmaster in Kes, I launched into TV sports commentary, “And it’s the young black curly haired MacEnroe serving for the match. It’s been a titanic struggle, four hours and five sets, and its down to this.”

How unnerving can this be, especially to a vulnerable teenager who thinks you’re a bit weird? Another flashing cross court drive went long, and the set was mine. I punched the air. Nicholas looked for somewhere to hide, just in case someone was watching.

So ended the third and final leg of our sports tournament. A thirteen year old with energy and a thirty four year old with attitude. Locked in combat for four days. A triumph for the older head.

The sports arena wasn’t great. That bit of a campsite where they don’t pitch tents, usually up the middle where the car ruts are. A battered portable chair did for stumps at cricket.  He was a natural attacking bat who tended to miss my consistent well pitched-up deliveries on off peg. I tried to convince him of the virtue of the forward defensive, but it was an innings victory to me. One-nil. We hadn’t coats for soccer posts and corner flags so we made do with spare pegs and bits of guy rope. He was too good. One-all.

At tennis we had a contest. We both made mistakes and cheated, or tried to. But I kept the bald soft tennis-cricket ball in play more often and ran out champion, two-one. He wasn’t miffed. Losing to his uncle simply fitted with the abiding bewilderment that was his approach to life. A tall, blonde slim teenager, he could still be the toddler who peeped at the camera round the folds of somebody’s coat, skirt or trousers, open-mouthed and wide-eyed, as if he’d unexpectedly stumbled across someone with two heads.

June 1981, a field between Muker Beck and the B6270, on a farm called Usha Gap, near Muker in Swaledale. The lady of the house had greeted us with old fashioned courtesy, showed us the tap, toilet and chemical disposal point, took our order for milk and wished us a nice stay.

Each morning I woke, got out of my sleeping bag, undid the tent door and stretched in bright sunshine. Green hills either side of us. Grey walls and barns. Leafy trees hugging the stream which flowed from under the arch of a narrow stone road bridge. One car at a time and not very often. Above the bridge, away in the blue hazy distance, Great Shunner Fell.

Breakfast was accompanied by the planning of the day’s itinerary.

“I don’t know, what do you want to do?” Nick sat eating a bowl of cornflakes, wearing shorts, floppy hat and bright yellow T-shirt.

“But what do you want to do?” It could’ve gone on for ever. For a quiet life I cut it short and made a decision.

The highlight of the first day occurred late afternoon on a hillside just above Gunnerside.  The sheep were fairly loud and got louder as we got lower. We came across a short heavy man in his fifties, wearing a knotted hankerchief on his head, a vest, working boots and trousers tied off with string. He stood in a dry-stone wall circle. A convenient ledge for elbows. A half-full water bottle lay discarded next to a small wooden gate fastened by pink twine. He was bending over a sheep with a pair of industrial sized scissors in one weathered hand. The other, along with knees and anything else available, kept the sheep sort of still but not quiet. The fleece came away quickly, leaving the odd small red blemish and narrow ridge of residual coat. The sheep bounded off and the farmer slowly straightened his back.

“Aye,” his red brown unshaven face glistened as he retrieved his bottle. Not a great talker.  He did tell us how many he did in a day, but I forget. Loads.

“Where are you from?”

“Nick here’s from Widnes. He’s my nephew. I’m from near Manchester. Moving up here soon. Got a job in Northallerton.”

“Aye, down in the town like,” he wasn’t impressed.

We said goodbye and walked back to where I’d parked in the village. On its own, below a church and next to a signpost marked footpath.

Back in Muker, after some sort of a wash and brush up, Nick changed his trousers and discarded his floppy hat. The bright yellow T-shirt stayed. We went for a bar meal at The Farmers Arms.  Sausage, egg and chips with extra peas for Nick. Standard fare, a plateful, and not a lettuce leaf or slice of tomato in sight. He finished in no time and shuffled about.  I wasn’t even half way.

“Here have some of mine,” I suggested.

This clearly offended some sense of good form, “No, you eat it.” He shuffled around some more. I remembered how much I used to eat as teenager. Eight slices of toast for Sunday breakfast. Mum bought a cooker with an outsize grill specially.

“Do you want another dinner?”

The barman never turned a hair. The mild murmur of four farmers, playing dominoes and drinking in the corner, stopped as the second plateful arrived. I browsed the notice board, and tried to look nonchalant. Muker Silver Band’s coffee evening fund raiser, cottage vacancies, a production of Frankenstein.

Back at the tent, “Are you putting the kettle on, Dave?”

I momentarily stopped what I was doing and thought about a pithy comment. I decided against it and put the kettle on.

Luckily, Frankenstein was on at The Civic Hall the following night. A building you could walk round in a minute. A small foyer, wood table and a money tin. The doors behind the table were slightly ajar and whatever was beyond was in total darkness. The woman who took my money reassured us we still had five minutes. As we felt our way to the last two seats at the back, I became vaguely aware that fifty or so people were already crammed in.  My eyes gradually adjusted. The far end of the small hall was dimly lit and seemed to be curtained off, but I couldn’t see a stage. They must have cornered the market in army surplus black-out material. But I could still see Nick, or more precisely, I could still see a yellow T-shirt. Then a chink of light followed the sound of a door opening. Voices, and the performance was underway.

They turned the lights on at the interval and served soft drinks and cake. I bought a home-made programme.The sixth form of a posh school from The West Riding were on tour.  Performing in Grassington the day after. The storm was excellent. Whoever was on the tea tray had a great future in tympany. The good doctor, a handsome lad, had his right leg in plaster from ankle to hip. You could hear him, but sometimes you couldn’t see him because he delivered his lines from a wheelchair, two feet below the rest of the cast. The actors moved beautifully, they had to. The doctor’s leg stuck out in front of him like the flag post on the front of a boat.

“I’ve got this thirteen year old with me, can he come in?”

“Aye, as long as you take him away with you, when you go.” Nicholas laughed.

Sombre stone walls, huge fire and dark, even in high summer. Apart from the bar that is, which was lit up like a booth at a fair ground.  We played pool in the room next door and ran out of the right sized coins. The landlord came back with us and lifted the top off.  There, in one of the legs, was all the change we needed.

Back at the tent, “Are you putting the kettle on Dave?”

I had one too. I wouldn’t again.

The next day we walked over Calver Hill near Reeth. It was sweltering and I stopped sweating. By evening I was hot and shivering and all I could do was lie on my sleeping bag, “Sorry Nick, I’m knackered.” Despite ten to twelve hours sleep, I was still poorly the following morning.

“But what do you want to do?” It could’ve gone on for ever.

It was all I could do to read a book, sheltering in the shade of the huge castle walls that overlooked the Swale. Nick, in shorts, floppy hat and bright yellow T-shirt, caught fish in a jam jar. I bet he wears it in bed.

Mid afternoon, “We need more supplies Nick, have you done?”

At the top of the steep market square I was wet through and well again.

Back at the tent, “Are you putting the kettle on, Dave?”

“Something to put me on, you know.”

I knew. Aye, lets fill him up. Make him sluggish for the tennis while I  save myself. I need an edge.

Must have been odd to be away with your uncle, not your dad but not a mate either. You have to behave, but you don’t.

He’ll be an uncle one day, punching the air after beating his nephews at tennis. And he’ll have the same twinkle in his eye that I had, “You’re not quite ready for me yet, kid.” 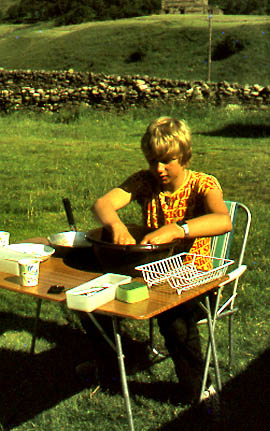